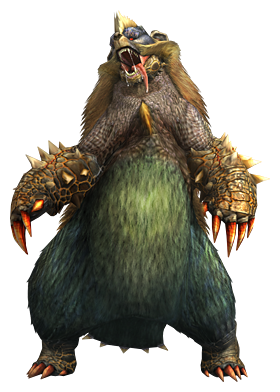 Low level monster that you hunt, of course he does change when going up the ranks, and MHGen gave him a new twerk attack, so that's cool. He's a good monster to hunt if you want to practice dodging or blocking attacks, he has a frontal swipe, swinging attacks, rotating swipes, and a couple buttslams he can do. Mostly fought in the forest areas, like Deserted Island or "Forest" he likes to eat honey when he's tired which leaves him open to attacks. Generations gave him a little twist by giving him a Deviant (not a special kind, just generally species-esque) Redhelm Arzuros, which doubled his size and strength while also giving him a red mowhawk.