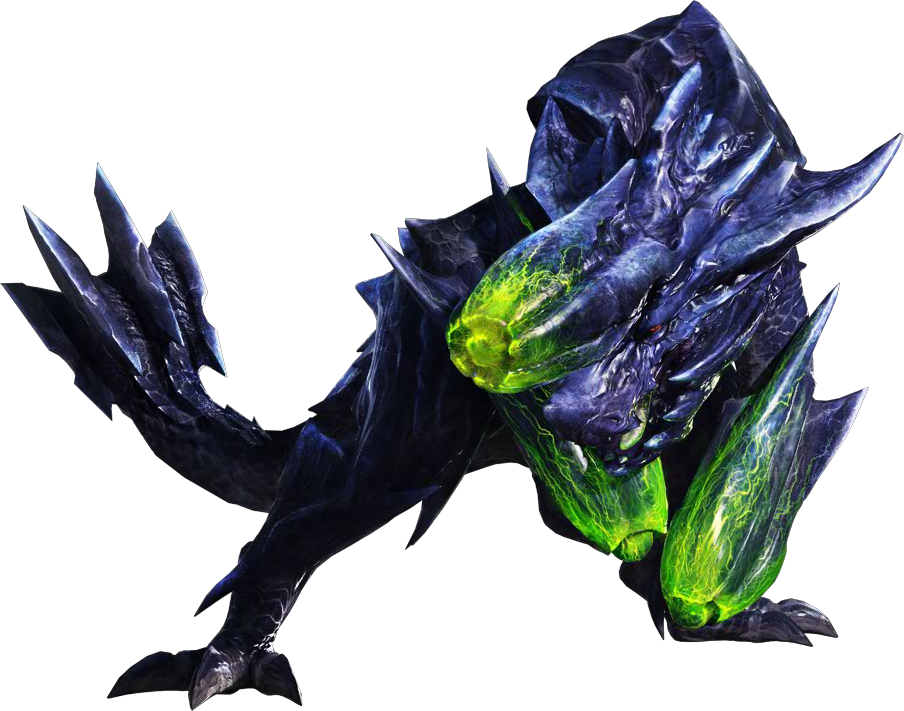 Hunted him several times in 3U, he's a great time of a fight. He's Mr. Bombastic and got a kickass pompadour, green boxing gloves, and this weird tail. Others may say otherwise, but I think he resembles a lobster. His attacks range from punches, exploding slime, punches, head slamming explosive action, punches, long range explosive bursts, and flying punches. 3U Brachydios was gamebreaking, not because he was really dangerous or anything, his weapons were coveted for their destructive ability. Blast formerly known as Slime was a dangerous speicial debuff that slowly accumulated upon monster impacts till it did a max explosive damage to said monster that broke parts, broke minds, and could be spammed on the monster until their explosive deaths. Capcom noticed this and the Monster Hunter team decided to remake it into blast and nerfing its damage. Slime was pretty much synonymous with Brachydios, his attacks would place a debuff on your hunter, which slowly would explode, you could tell when it would explode since the color of the slime would turn red (it also did this on monsters you attacked with a slime weapon). Blast however has been modified to other Monster attacks, like Teostra farts, Glavenus bites, and Fatalis things. Blast to my knowledge, has no indication on when it'll explode which differentiates it from Slime, but it still takes three rolls to put it out and remove the debuff.

Why is Blast so important to Brachy? Well it was his image until they spread it around alot to other Monsters losing his individuality. Plus the new Blast weapons aren't as strong as they used to and aren't only Brachydios weapon exclusive.

Back to Brachydios, his punchy attitude along with Blast's ridiculous damage, he's a tough monster to crack. Here's an example; Brachy punches you and you have blast debuff and 3/4 of your health is left, add another punch and the damage from Blast and you will have no health left and you will have carted. So pretty much as soon as you get a Blast debuff, roll 3 times and you will not be liable to blast-induced carting.

Brachydios' hunt is a two part hunt, one part regular Brachydios, second part A N G E R Y B R A C H Y D I O S . Like all monsters, hitting them makes them angry, so they are liable to activate a rage mode. Angry Brachydios covers himself in slime (part of his image right) and all of his attacks explode on IMPACT, so that whole 3/4 of your health is out the window when he hits you, but it does not leave a blast debuff so you don't have to worry about a round two. So all of his attacks do explosive damage, but what else is new. (Michael Bay's favorite monster) General tail whips, the tail does not place a slime debuff since it never get's coated in slime and the like. Punches punches punches. He's got two head slamming attacks, one where he pulls out the ground and sends a long range slime shot, the other has a long windup and explodes an area around him.

All in all he's a bombtastic hunt and has good weapons and armor.