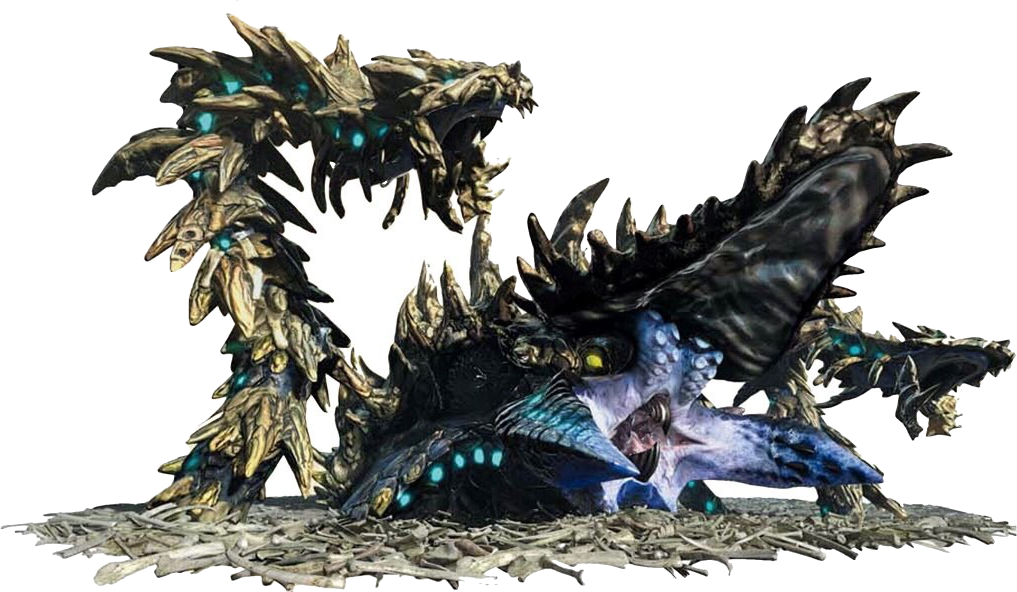 A great chasm lies below you, from what you see, nothing lies at the bottom, but darkness. A roar emanates from below, the sound of a monster, you jump into the abyss.

You land with a crunch, from what you feel and see, the ground is comprised of only bones.

The ground is littered with random monster bones, most of which you recognize are formerly made out of Uragaan, Lagiacrus, Brachydios, and random monsters.

A large body, a shell if you would emanates from the pool of bones. Two large, leviathan-looking creatures forefront the giant shell, propelling it forward.

The Leviathans are comprimised of only bones, with their heads gleaming at the eye sockets.

Enough attacks reveals that the Leviathans are tendrils, tentacles if you would.

The exposed tendrils retreat under the bones, the shell turns around, unburies its face and reveals itself.

The User of Hellfire Star

Nakarkos is one of the Elder Dragons, a monster of great power. Nakarkos hunts and eats other monsters, and uses their bones to mask his two tentacles and fight with the properties of said monsters. Mostly found in undersea regions, they have been known to consume Ceadeus pups and the like, and are a dangerous foe to fight. The Hunter's Guild instructed you to hunt this monster to stop its reign in the area, however they are still unsure of what the Monster may entail during it's hunt. To keep the bones sticking onto its tendrils, it uses a sticky blue excrement that sticks bones to anything covered in the stuff, including hunters. It can fire it's excrement out in beams, bubbles, and expels a gas-like substance which is the blue excrement. Nakarkos can also expel the Dragon Element, in the form of a lazer beam, from its tendrils and beak. It's most dangerous attack is its megabeam, which he charges and expels from his mouth, a quick use of a tranquilizer bullet or ball can stop the ability from activating. The beam can be noticed charging, Dragon element slowly sparks all over his body and tendrils, and he digs in his tendrils to help lessen the blow of the lazer and digs him into the ground. Nakarkos normally just charges and attacks with its tendrils, very boring without most of the other attacks.

Nakarkos' enraged mode has him expose his face, which is covered by gaseous blue goo, do not engage him while the goo is active. If he is not enraged then he keeps his back shell covered.

During Nakarkos' enraged/exposed mode, his tendrils can use the bones of former monsters to enhance their attacks.

A tendril enhanced with Uragaan bones takes the jaw of an uragaan and procedes to smash and spasticly attack all over.

A tendril enhanced with Lagiacrus bones takes the backspikes of the Lagiacrus and has a unicorn look. It can toss of its spikes to cover the field, it sparks electricity between these spikes and it can cause electricblight or paralysis.

Nakarkos is the last important Elder Dragon you fight, and it propels you into true G-Rank where your hunter rank is unlocked.

A tendril enhanced with Brachydios bones takes the pompadour of the Brachydios to smack around and put the Blast element all over the map that will eventually explode. The hunter can also be effected by Blastblight and makes it all the more dangerous.