Jaws of the Desert, Nibelsnarf 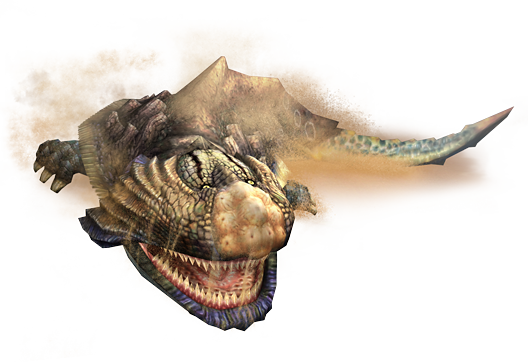 He's got big teeth, no molars, only canine. He's got a single row of sharp teeth and he's really really bitey. He loves biting things like stone, barrel bombs, hunters, such and such. He really likes barrel bombs though, he charges around 3 or 4 times back in forth to get a bunch of barrel bombs in his mouth. His mouth is even wide open too. Any attack he does is primarily biting, other attacks feature body-based attacks with a bit of biting in it. Of course he does have a sandblast, where he breaths in and slowly moves the blast in the direction of a hunter. He also has a sandspit, gills on the side of his head extend out to flush sand out and it does deal damage since it's pressurized. One thing that I haven't really discussed in most of these guides is the monster's exhaustion stage, where they are tired and hungry. Nibelsnarf hangs out with a slackjaw and his gills extended, this is the only time where you can damage them and attempt to acquire the rare monster part that comes from the gills. And of the exhaustion stage, Capcom (creater of Monster Hunter) must've buffed the monsters so they don't tire as easily anymore, which makes it rather unfair because the monsters are more enraged than when they ever fall from exhaustion. He's also not called Nibblesnarf, but Nibelsnarf