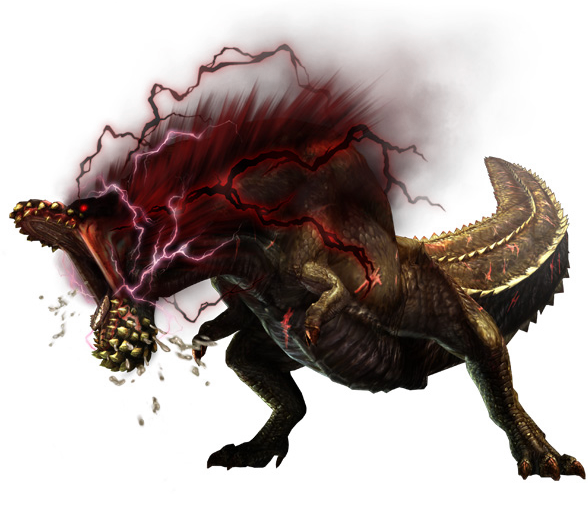 There's a fine line between a regular and Savage Deviljho, burn these two bottom images into your mind.

This is Savage Deviljho, and this is Regular Deviljho.

Savage has clear distinctions from regular Deviljho, the only real distinction that you will either hunt a Savage or regular is their icon. If it is the first icon then you'd better prepare to be absolutely demolished.

Savage Deviljho has some fun characteristics about him, he drools a nice amount which is actually highly acidic stomach acid that pours out from his mouth and inflicts the hunter with armor down, due to the fact that the acidity has lowered your defense. Savage Deviljho also suffers from high amounts of the Dragon element, which literally sparks around his body. He can do multiple gigantic dragon breaths, it doesn't smell but you just become dragon debuffed and be chunked by a giant angry dinosaur's hungry projectile breath attack. The dragon debuff is (to my understanding) a debuff that has the hunter deal less damage, or have the hunter deal no elemental damage. Standard Deviljho attacks, stomps, bites, projectile stones, dragon breath, tail smacks. Savage Deviljho has two different pinning attacks, one where he pins you under his foot and starts biting like you're the last piece of meat in the serving tray, the other pinning attacks is where he takes you whole and your hunter struggles to escape his chewing jaws, it's not actually that brutal, the hunter's body isn't torn to shreds or anything either, it removes all of your health bar and you're definately being carted.