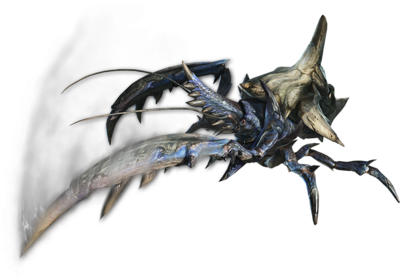 Shogun Ceanataur came with Hermitaur, same type of monster that loves having the skull of a monster on its back. Ceanataur's back-skull is a Gravios or just a normal shell. It doesn't have the properties of an actual Gravios because it's dead. Ceanataur is different from Hermitaur, Ceanataur has long spiky claws, Hermiataur has shield-like claws that it uses to protect itself. Ceanataur has a protruding face-spike, Hermitaur has a flat face. Shogun Ceanataur fights using his claws, when he's enraged they portrude out like a pocket knift and have far longer range to slice and dice. Ceanataur's main attacks are claw strikes, claw swipes, claw pecks, and some annoying ass attack where he just walks forward with his claws out and it does tons of damage. Like he doesn't even charge up to start charging, he just charges forward nonchalantly and it deals damage. He also charges backwards and it does the same amount of damage. Ceanataur also digs down into the ground, and he uses his face horn to smash upwards like some sort of spike that comes out of the ground instead of into. When Ceanataur's enraged, his mouth foams, but he doesn't do water beams like his cousin Hermitaur.