The Elder Dragon of Malice and Fire 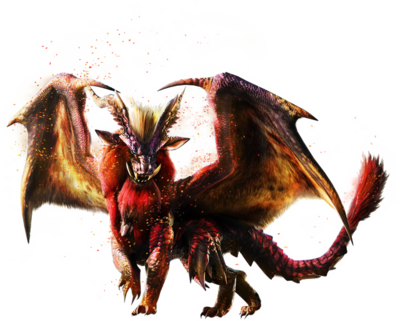 Teostra's an elder dragon. He's got blast damage, and his deadly supernova attack. Most of Teostra's attack border on the rage spectrum. He charges indefinately, never tiried from exhaustion. He's also got claw swipes and tailwhips which debuff you with said blast damage. Teostra also has flame breath, and can fly around with the breath on like a deadly search helicopter. Teostra's pinnacle is the supernova, where he flies into the air roars and then explodes. This is the most damaging attack considering how much his attacks can chunk you, you are most likely to instantly cart. Teostra's wings, horns, and his tail can be broken off.